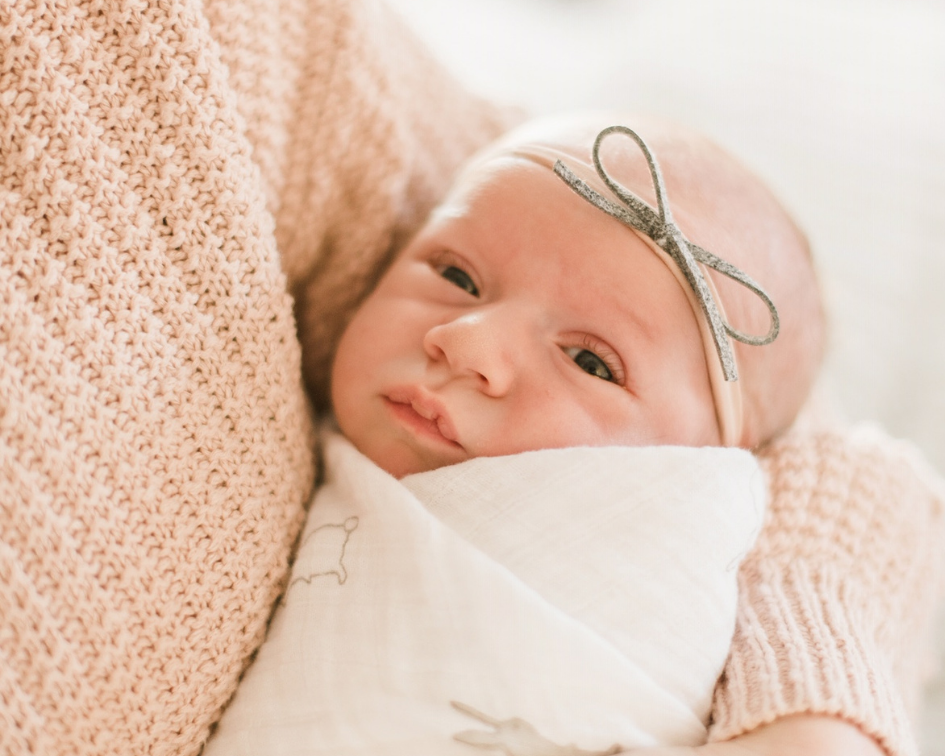 In the newborn days, we based our schedule around feedings with the general rule of thumb being every 2-3 hours or on demand when needed. As Harper approached 6 weeks old, we started to set more of a routine and predictable schedule. This helped build a healthy sleep foundation from the very beginning! I offer newborn sleep classes to help you know what to expect and slowly lay a healthy sleep foundation from day 1. You can also work with me one on one, I'd love to help!

Day in the life of Harper as a Newborn

I'll start off by saying, I think Harper knew her mama was Type A and came out of the womb on a schedule. Even from the early days, we fed on demand but that ended up following a pretty predictable cadence each day. As soon as Harper's umbilical cord was healed, we introduced a nightly bath and stuck with the same bedtime routine every single night! Honestly, we've only missed one bath since she we started this at 2 weeks old. Most days looked like the below: 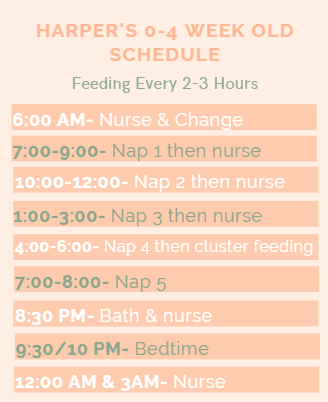 Day in the life of Harper @ 1 Month

At 1 month old, Harper was still so tiny, so we still fed on demand/every 2.5-3 hours. She went to bed around 9 PM and would wake once for a feeding. In the morning, we would feed her at 6 AM and then go back to sleep until 9 AM. It was sort of a nap, but sort of an extension of night-time sleep. We kept this pattern until she was around 8 weeks old. 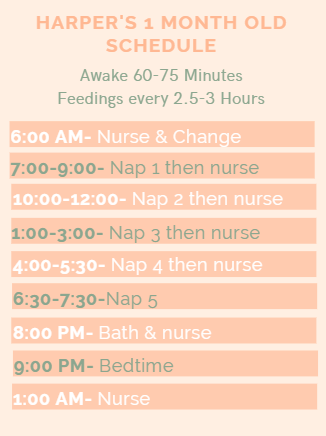 Day in the life of Harper @ 2 Months

At 2 months old, we started to work towards an earlier bedtime. The hours between 7-12 AM are the most restorative sleep we get, so we wanted to work towards that goal. She was able to manage wake times of closer to 75-90 minutes, so we were able to drop the 5th nap and go to bed earlier. 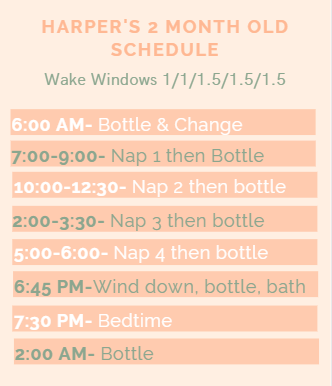 Day in the life of Harper @ 3 Months

At 3 months old, Harper's schedule did not change that much from the prior month, except she could stay awake happily for around 1.5 hours. We would truly start our day at 6:30 AM rather than before when we would almost treat 6 AM as a night feed and then go back to sleep until 9 AM, thank you maternity leave! 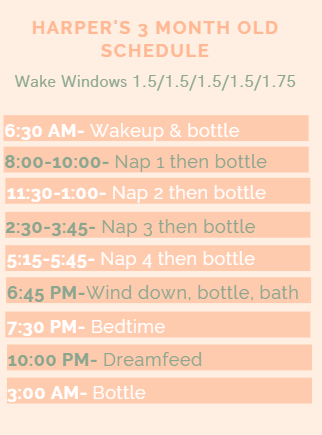 Day in the life of Harper @ 4 Months

At 4 months old, we transitioned from 4 to 3 naps, starting at 8:30, 12:30, and 4. This was an easy transition and just resulted in a slightly earlier bedtime. We made this transition since her 3rd nap wasn't starting until 4 PM and would push bedtime too late if we kept another nap. 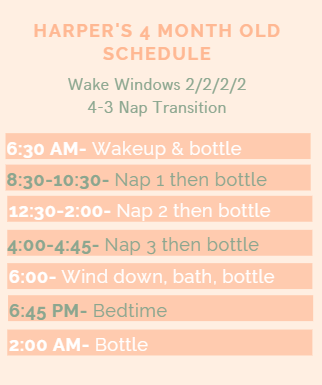 Day in the life of Harper @ 5 Months

At 5 months old, we had to cap her daytime sleep at 3.5-4 hours because we had some happy middle of night parties (AKA split nights) due to too much daytime sleep! Around 5 months, Harper was barely drinking anything during her middle of the night feeding so she weaned herself off of it and she started sleeping through the night. If you've read my other posts, you'll remember we had LOTS of feeding issues with Harper, so we did not try sleep training or weaning night feeds until Harper was ready. We did work on independent sleep and laid a great foundation for her to utilize when she was ready. We did always try to hold her to her personal best (longest time at night she went between feedings) for night feedings and made sure she was not relying on any sleep props to fall asleep. We kept the pacifier because it was not disrupting sleep and she learned to replace it when it fell out at night, if she desired. 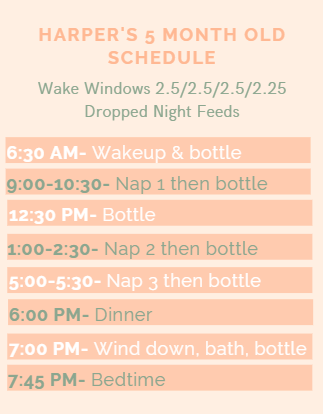 I hope this helps guide you through your baby's first few months! I found it helpful to have a routine from day 1. Obviously, not everyday will play out perfectly and newborns are unpredictable! Do not beat yourself up when things do not go according to plan. However, babies on a routine are much more predictable and will sleep better than the latter. All babies are different and may tolerate more or less wake time at different ages, these schedules are what worked best for our family. If you are struggling getting your baby on a routine or struggling with anything at all, let's talk!